There are numerous temples in Karur but what garners most of the attention is the Pasupathieswarer temple located in the heart of Karur. In fact the temple is so famous that most of the tourists have known Karur through this great temple. Known to be one of the seven abodes of Lord Shiva in the Kongu region, one can say that the Pasupathieswarer temple has its own share in making Karur a well known tourist location. The temple is an ancient one which is not just famous for the legends associated to it but also for its sculptural beauty. The residing deity here is Pasupathinathar (Lord of all living beings), one of the forms of Lord Shiva. 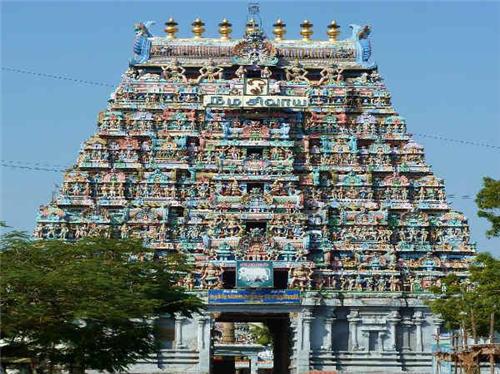 History of Pasupatheiswarer Temple in Karur

It is said that Lord Brahma was filled with pride after gaining the position of being the creator of the world. Lord Shiva wanted to take away this feeling of pride from Brahma and hence decided to teach him a lesson. To do so he sent the celestial cow Kamadhenu to the dense forest of Vanji (Karur was earlier known as vanji). He told Kamadhenu that he would find a linga in an ant hill in the forest. Kamadhenu is known to have prayed to Lord Shiva at this place. Following the Lord's instruction, Kamadhenu poured milk over the linga but in doing so its leg touched the linga by mistake. Immediately the linga started to bleed. Kamadhenu apologized to Lord Shiva for what happened. It is said that Lord Shiva was so happy with the cow’s devotion that he appeared before Kamadhenu and told that he would be worshipped as Pasupathieswarer at the temple built here and assigned him the job of creation of the world. Kamadhenu then as told completed his work. At a later stage Lord Shiva however gave the work back to Lord Brahma after he had shed away all his pride. This is known to be the history behind the whole existence of the Pasupathieswarer temple. It was later in the Skanda Purana period that the renovation of the temple was undertaken by the emperor Musukunda. 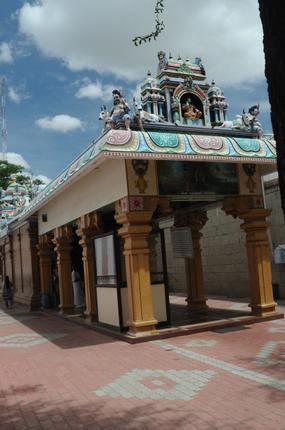 Specialty of Pasupatheiswarer Temple in Karur

The Lingam at the temple is a swayabhumurthy (self created). The footprints of Kamadhenu can still be seen on the lingam at the Pasupathieswarer temple. Pasupathieswarer temple is one of the seven Shivasthalams in the Kongu region. Infact the Karur temple is the first and the most foremost one to have existed. The temple also holds a small place in the southwest corner dedicated to Karavur siddhar, who was one amongst the 18 siddhas. He is said to have prayed to Lord Shiva in this temple. Once it so happened that the Brahmins of that area complained to the king about Karavur siddhar and accused him of offering wine and meat to the Lord. The king verified and found that the accusation was wrong and punished the complainants. But even then, they kept harassing Karavur siddhar. He, then on the day of Thai poosam disappeared and got dissolved with the Lord, according to a story.

The Pasupathieswarer temple has two gopurams and has an extensive seven tier 120 feet high rajagopuram in the front which is adorned with images of mythological characters. The main attraction though is the 100 pillared mandapam of the temple. It holds the inscriptions of the Chola and the Chera empires. The lowermost segment holds the dwajasthamabam, the Bali peetam and the nandi while the upper segment leads you to the maha mandapam, ardha mandapam and garbagriha. The ceiling is completely painted with sprawling images from the puranic lore. The temple compound also has a holy tree called vanji and a thadaagai theertham which is considered to be a holy spring.  The presiding deity also has two consorts, Alankara Valli and Soundara Nayaki, whose sannidhis are present to the north of Lord Pasupathinathar. Infact there is an underpass that takes you to their shrines from the mandapam. While the southwest corner of the temple holds the sannidhi of Karavur siddhar. The Linga murthy which is a swaybhu one is 5 ft tall and is slightly tilted to the north. It is said that the Lord tilted himself to enable Karavur siddhar to merge with the Lords effulgence. Every corner and every inch of the temple is carefully and beautifully created making it a spectacular piece of architecture. Walking around and feeling the walls makes you realize the vast and powerful stories that lie inside temple. The atmosphere is filled with spirituality and devotion of the worshippers which makes every visitor experience the presence of the Almighty. 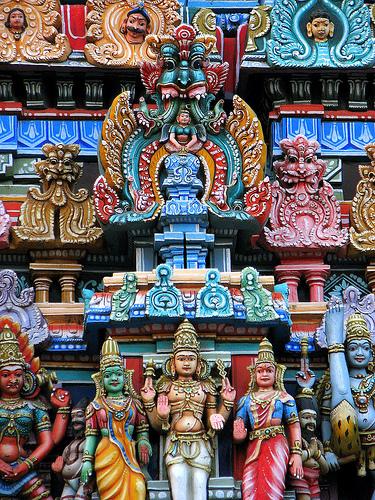 Festivals and Rituals in Pasupathieswarer Temple

There are hundreds of devotees who come here every day to meet the Lord and submit themselves on his feet to attain complete peace of mind. While milk, curd, coconut etc is offered to the God, the Goddess is offered with sarees, jewelries and mangalsutras. Every day pujas are offered to the Lord which includes archanas and abhishekams. The temple has two main festivals, each is celebrated for 13 days.  The ‘Bhramotsvam’ festival of the temple falls in the month of Panguni (March- April). It is said that during 3 days of the month of Panguni the sun’s rays directly falls on the lingam. Also, the ‘Arudrapuram’ festival is celebrated in the month of Margazhi (December- January).Apart from these, Navarathri, Eripaththa nayanar utsavam and auspicious days like the full moon day, Pradosha days, Jupiter and Saturn’s transit days etc are celebrated with great devotion.